The main periods of Jewish immigration to the current territory of Belgium : 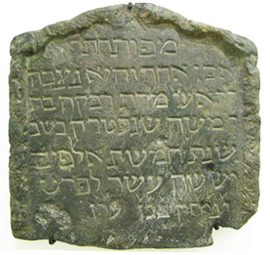 Tombstone from Lady Rebecca (62 X 64 cm) from 1255/1256 found in 1876 in Tienen (Tirlemont). Collection of the Royal Museum of Art and History (picture of the reproduction: © collection MJBP)

They settled into small communities. As long as the Black Plague (1348-1349) was devastating Europe, the Catholic Church accused the Jews to profane the ‘sacrificial bread’, the host. In 1370, the Jews who survived the epidemic were burnt on the stake of Brussels with the consequence that the Jewish community disappeared almost completely of this town.

The most ancient remnants of Jewish presence in current Belgium is the tombstone of a Jewish woman, buried in Tienen / Tirlemont in 1255. In Germany, the library of the University of Hamburg is in the possession of a Hebrew manuscript of 1310, written by a scribe of Brussels. 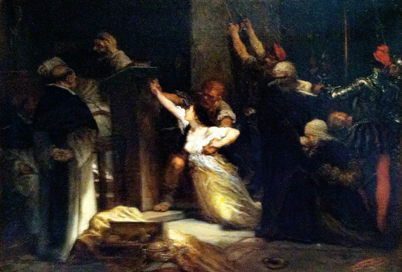 Louis Gallait (1810-1887). Jewish family accused of a concealment of religious objects and tortured by members of the Holy Inquisition. Oil on canvas, 1885. Collection of the Museum of Fine Arts in Ghent (inv. 1885-B) (© D. Dratwa)

At the beginning of the 16th century, the Marranos or Crypto-Jews living in Antwerp played an important role in economic and financial affairs of the town.  Because of Spanish pressure, most of them left Antwerp around 1540-1550, ending the second Jewish immigration in our region.

Although some of the Marranos or Crypto-Jews returned to Antwerp during the 17th century, they could not enjoy anymore the same economic and financial level they used to have a century before.  A secret synagogue existed in Antwerp over the years 1650-1694.  Some Marranos poets have also lived in Brussels at that time.

During the 18th century, Jewish presence in the Southern provinces, under Austrian reign, remains low; about 100 Jews – householders – lived in Brussels in 1756.