After the French Revolution until World War I 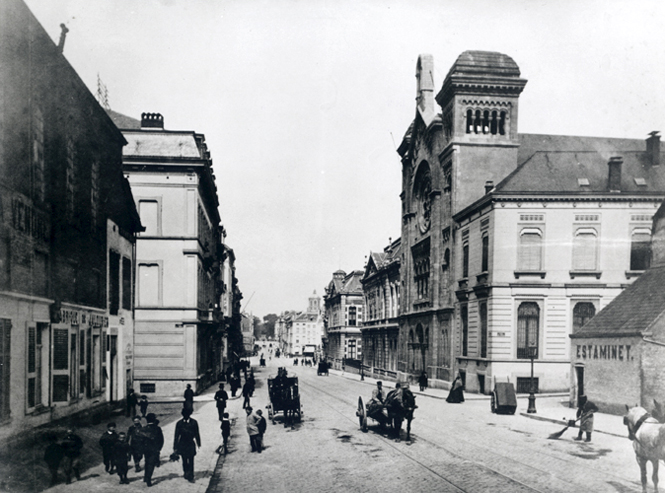 Picture, taken between 1890-1900, of the rue de la Régence direction Place Royale On the right side you can see the Great Synagogue of Brussels as well as the premises of the community buildings of the Jewish Central Consistory of Belgium, build by the Belgian architect Désiré De Keyser and inaugurated in 1878. (© Collection MJB)

During the Napoleonic conquests, the former Southern provinces were incorporated into the French Republic in 1795.  Jews residing there, benefited from decrees proclaiming the equality of all citizens.  On March 17, 1808, Napoleon recognized in a legal way Judaism as a religion organized by synagogues and administrated by consistories.  The small Jewish communities in our region depend on the consistories (2) of Krefeld (Germany) and Trier (France).  After Napoleon’s defeat at the battle of Waterloo, near Brussels, our territory is incorporated into the newly formed Kingdom of the Netherlands.

By the revolution of 1830, Belgium gained independence and became the Kingdom of Belgium.  The Belgian Constitution proclaims the separation between religion and state.  Judaism becomes an officially recognized religion and its practice is free.  Jewish education is legally organized by the national authorities, in this case the Ministry of Justice.  Today the Jewish Central Consistory of Belgium is in charge of managing all practical questions about Jewish life; appointments of rabbis, cantors, beadles, ritual slaughters and religious teachers; it is also responsible for the official recognition of synagogues. 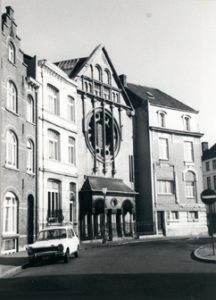 In the center, the synagogue of Ostend, at the Square Filip Maestricht, designed by the Jewish architect Joseph De Lange and inaugurated on August 29, 1911. (© Collection MJB)

During the 19th century, the Jewish population of Belgium increased slowly thanks to the arrival of Jews of Alsace and Lorraine in Southern Belgium, German Jews to Brussels and Dutch Jews to Antwerp.  The consistories, instituted by Napoleon served as models to organize religious Jewish life in Belgium.

An estimation of the Jewish population in Belgium in 1880 was about 4.300 individuals.  After the assassination of the Russian Czar in 1881, a new mass emigration occurred from Eastern Europe as a result of pogroms.  For many of the fugitives, Belgium and especially Antwerp, was a stop on the way to the United States.

Finally, Sephardic Jews moved to Belgium from the Ottoman Empire during the Greco-Turkish war just before the start of the 20th century.

In the middle of the 19th century, the port of Antwerp became one of the biggest in Europe.   Sea connections between Antwerp and the United States became regular.  Some refugees whose intention were to emigrate to the United States, decided to stay in Antwerp, Arlon, Brussels, Charleroi, Ghent, Liège and Ostend.  In 1914, it is estimated that about 40.000 Jews were living in Belgium.

From 1918 to 1944
The United States decided in 1921 to restrict immigration.  Most of Russian emigrants had no choice and stayed in Belgium; many of them started working in then-booming and developing diamond industry. 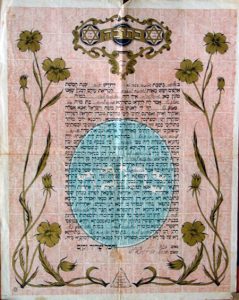 At that time, during the years 1920 and 1930, the Jewish community of Antwerp was strong and known to applicants for emigration from Poland.  Many religious Jews found there a safe place where to settle.

Nearly 30.000 Jews of Belgium were deported during the holocaust.  About 25.000 were deported from the Dossin barracks in Malines/Mechelen in Belgium and some 5.000 from Drancy in France.  The register of the Jews of Belgium in 1940 lists 56.000 Jews living in Belgium at that time.  We suppose that in 1940 about 10.000 Jews living in Belgium at that time before the start of World War II succeeded to flee or did not report to the authorities. 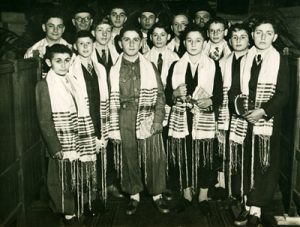 Group of 12 youngsters at a plural Bar-Mitzvah between 1945-1946 at the Great Synagogue of Brussels with cantor Pinkas Kahlenberg (in the middle of the last row) (© Collection P. Kahlenberg)

The rebuilding of the Jewish communities was the first and major goal of those who survived.  After World War II, the Belgian Jewish communities consist of people who could hide, as well as the 1.207 men and women returning from concentration camps.  They have been joined by other survivors and displaced people who never lived in Belgium before, mainly Jews from Eastern Europe (Czechs, Hungarians, Poles and in the 1950s also Romanians); most of them had family, friends or landsleit (people originating from a same city or region) in Belgium.

The flourishing diamond industry in Antwerp attracts many of them, while others try their luck in Brussels, where there are many opportunities.

After the war some Jews stayed only temporary in Belgium, due to the impossibility to legally emigrate to Palestine under British mandate.  Others remain in Europe due to immigration quotas imposed by the United States.  In the 1960s, the worldwide economic boom favored a strong development of Jewish organizations. Today, most of the structures that manage Jewish life in Belgium date back to the 1960s.

(2) A consistory is an organization, officially recognized by the authorities with the main goal to organize Jewish life and connected activities such as circumcision, weddings, burials, education and ritual slaughter.