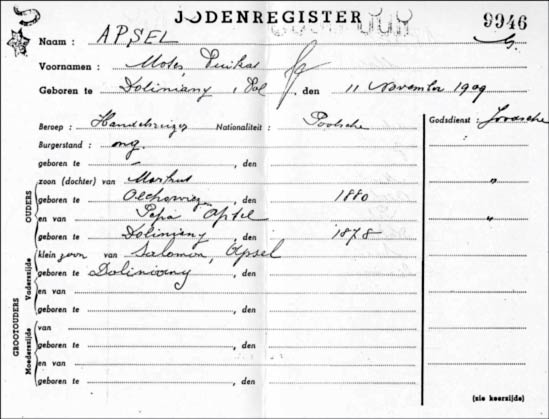 Standard registration form created during the holocaust by the Belgian municipal administration for the Jews. You find the name (Mozes Pinkas Apsel), birth place and date (Doliniany, November 11th 1909), occupation (salesman), nationality (Polish), information about the father (Markus, born in Olchowiec in 1880), the mother (Pepa Apsel, born in Doliniany in 1878), the father of the father (Salomon Apsel). Information about other grandparents are missing here. (© Jewish Museum of Belgium)

One of the main sources of information are cemeteries. Around the second half of the 19th century, some Jewish communities start to have ‘Jewish plots’ in public cemeteries, managed by the burial societies of the Jewish communities. The most important you find in Arlon, Dilbeek, Evere, Ghent, Hoboken, Kraainem, Marcinelle, Ostend, Robermont, Uccle and Wezembeek-Oppem.

In Eysden (the Netherlands) you have the cemetery of the Jewish community of Liège.

For a long time now historians found in archives other reliable sources of some different administrations: the censuses of 1756, 1803, 1815, 1829 and 1835, where the Jews appear as such without any connotation.

Nevertheless from the beginning of the occupation of Belgium, on the basis of the Decree of October 28, 1940, the Germans imposed on the municipal administrations of the country to make sure that all the Jews, aged over fifteen years, residing in the country, under threatening of heavy penalties, register on specific forms (Jodenregister/Registre des Juifs) detailing the composition of the family, its domicile, profession, religion, names and first names with place and date of birth of their paternal and maternal ancestors; this document had to be signed and dated. Those who refused risked heavy sanctions. More than 57.000 files are to be found in 212 different registers and kept by the Service Social Juif de Bruxelles. In 1991 these registers were transferred to the Jewish Museum of Belgium. The Dossin kazerne has a copy of it. Sadly we know what happened to most of those registered Jews and their families.

Public access of this database is prohibited, but complete information of recording can be provided on written request from a descendant of the registered person (see Jewish Museum of Belgium and the Dossin Kazerne).

Much written information has been lost due to the Holocaust. But also recent archives have been lost, due to the lack of interest of conservation of archives from some Jewish communities and institutions.

On this website you will find a list of the main Belgian institutions and organizations who are keeping genealogical and Jewish data as well as a list of national, provincial and local institutions which keep civil data: birth, marriage, divorce and death records. Judicial and notary records are more specific research alternatives.